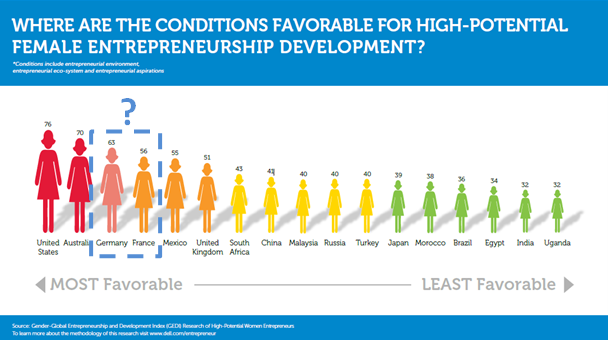 During one of our expert meetings for the Gender-GEDI female entrepreneurship index we were talking with Anne Simmons-Benton of DAI about how we can explain the gender gap in entrepreneurship in developed nations. One theory that was offered based on her experience training female entrepreneurs is that women frequently lack the confidence to succeed – often based on a lack of role models and support – which then becomes a deeply culturally embedded phenomenon.

This is something we see in the low scores for Germany and France on willingness to start a business: both countries are economic leaders, but for some reason a relatively large portion of women who could otherwise become entrepreneurs aren’t choosing to start businesses for fear of failure.

This shows that even in high-income, relatively progressive countries social norms can still exert a powerful influence, holding back innovators that would otherwise choose to become entrepreneurs.

For some developing nations it’s easy to look to institutional factors like access to finance and equal legal rights to explain some of the entrepreneurship gender gap. But in Western Europe women for the most part enjoy institutional equality. Instead, in countries where the tangible barriers to entrepreneurship have been knocked down, the less-tangible, internal and socially constructed barriers create the bottleneck. Where to go from here?

Interestingly, both France and Germany also score relatively low on “know an entrepreneur,” a measure of the percentage of the female population who personally know an entrepreneur who started a business within the last two years. One way for these countries to make progress would be to foster female entrepreneurial mentoring and support networks. As the numbers of female entrepreneurs grow, so too will the networks that support and inspire them, creating positive feedback that encourages more women to become entrepreneurs and that fuels economic growth.

The Gender-GEDI was sponsored by Dell and launched at the Dell Women’s Entrepreneurship Network meeting in Istanbul on June 4, 2013.